JCMG Podiatry invites you to a free informational seminar on the groundbreaking Lapiplasty 3D Bunion Correction procedure. Learn from the most experienced Lapiplasty surgeons in Missouri: Dr. McAleer and Dr. Duke. 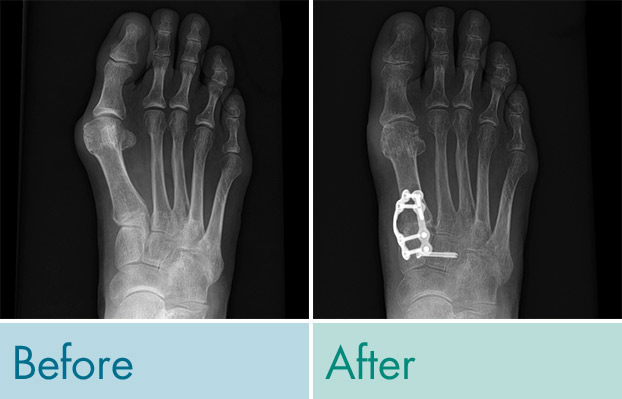 With common risk factors for the development of bunions including genetics as well as wearing tight, restrictive footwear; it was no surprise to Judy (a 65 year-old retiree from Missouri) that she developed bunions on both feet. Not only do bunions run in her family, Judy spent much of her adult life in dress shoes as the owner of a retail-clothing store with long hours on her feet.

For more than thirty years as a successful business owner, office employee, and busy mother, Judy suffered some degree of pain. She tried over-the-counter orthopedic gel pads and inserts in search of relief, but to no avail. As the years progressed and the pain increased, Judy limited her mobility. And, as the bunions became visible though many of her shoes, she began to feel self-conscious about her appearance.

In 2016, a searing pain in the middle toe on her right foot sent her to Dr. Jody McAleer, a podiatrist in nearby Jefferson City. Dr. McAleer diagnosed the pain as a pinched nerve brought about by the bunion. He suggested correcting it through a common, surgical procedure called a Lapidus bunionectomy.

Judy underwent surgery on her right foot in October 2016. She endured a lengthy rehab associated with the traditional Lapidus bunionectomy which required her to be completely non-weight bearing for the first six weeks (no walking at all), before being allowed to move into a walking boot. Full recovery took close to six months. 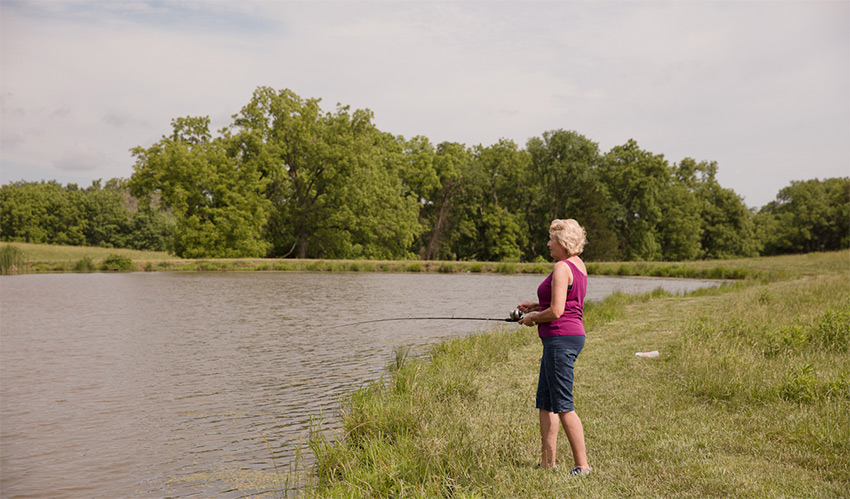 During one of her follow-up visits with Dr. McAleer, he informed her about a new surgical procedure called Lapiplasty® 3D Bunion Correction that he had learned about and had become trained on. Dr. McAleer felt this new procedure would be a good option for the bunion on her left foot.

Unlike the traditional Lapidus bunionectomy, the Lapiplasty® Procedure would do more by addressing all three-dimensions of the bunion deformity by rotating the patient’s entire affected metatarsal bone back into normal alignment instead of just shaving the bone and pushing it over. The unstable joint is also permanently stabilized with patented titanium plating technology. This 3D approach to bunion correction naturally removes the bump and straightens the toe, while the patented Lapiplasty® titanium plating technology enables patients to bear weight on their foot within days.

Judy’s Lapiplasty® Procedure took place in June 2017 and, compared to the first surgery on her right foot, she experienced an accelerated recovery. She was able to put weight on her left foot the day following the operation, in a walking boot. She was able to move out of the boot after six weeks into normal, comfortable shoe wear; and was walking pain free at 2 months.

“The difference between my first bunion surgery and the Lapiplasty® Procedure was like night and day. I was happy with how quickly I was on my feet and fully recovered with the new approach,” Judy said.

And today, according to Judy, she is pain-free, no longer self-conscious with her appearance, and enjoys life with her friends and family. She is content with the knowledge that if the bunion on her right foot should reappear, she can address it with the newer, novel approach of Lapiplasty® 3D Bunion Correction. 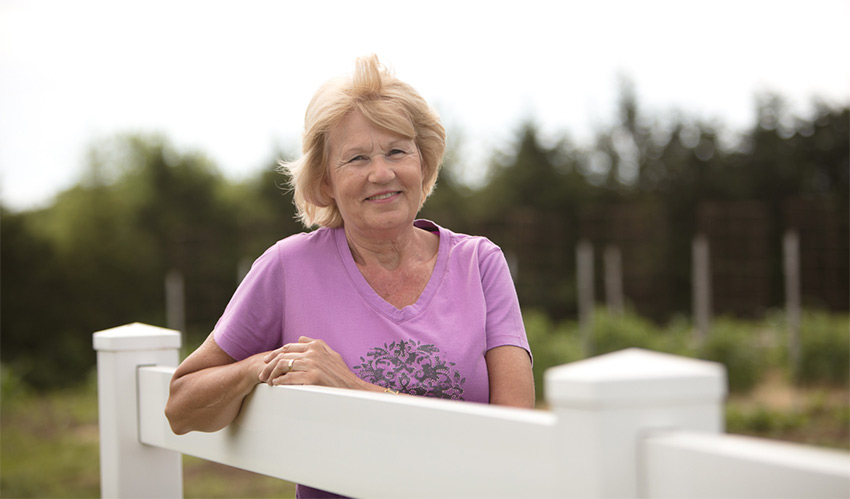 Only a surgeon can tell if Lapiplasty® 3D Bunion Correction is right for you. As with any medical treatment, individual results may vary and this experience is unique and specific to this patient only. There are potential risks with surgery and recovery takes time. Potential risks include, but are not limited to: infection, discomfort from the presence of the implant, loosening of the implant, and loss of correction with nonunion or malunion.

Jim spent many years on his feet wearing steel-toed boots on concrete floors.  He worked in a factory for a while and then for the highway department.  Jim, now retired at 64, does a lot of work at home as well. Unfortunately, about five or ten years ago, he was slowed down when he began developing bunions on both feet. The bunion on his right foot was particularly painful.

Although in pain, Jim delayed doing anything about it because he knew several people who had had surgery to treat their bunions and they were off their feet for three months.  But, as time went on and his bunions became more painful, he found he could no longer run for exercise and was even limited playing with his grandchildren.

Then, one day, he saw that two local doctors, Dr. Jody McAleer and Dr. William Duke, were offering a seminar on a new procedure to treat bunions; Lapiplasty® 3D Bunion Correction™. 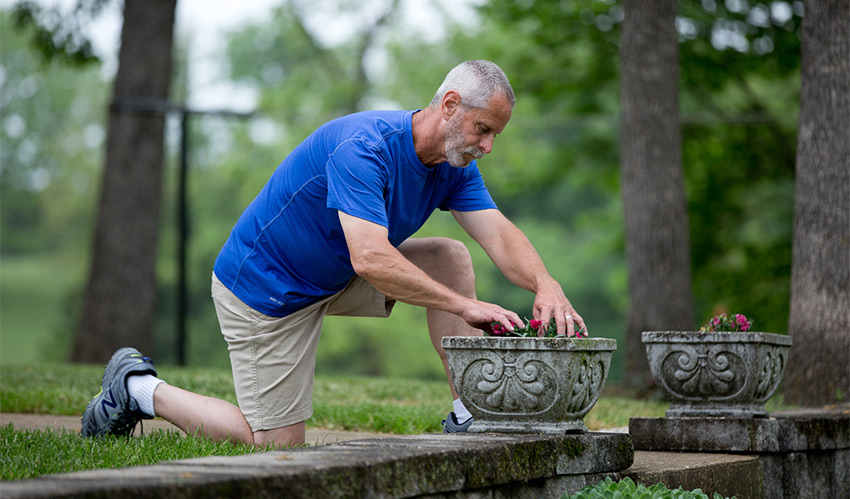 Jim attended the seminar and learned about the benefits of Lapiplasty® 3D Bunion Correction™, a procedure which treats all three dimensions of the bunion deformity by returning the entire metatarsal bone to its normal alignment and permanently stabilizes the joint – naturally removing the bump and straightening the toe.  To Jim, Lapiplasty® 3D Bunion Correction™ looked like a better fix than a traditional bunionectomy because this surgical procedure addressed the root cause of the bunion rather than just addressing the cosmetic issue, and he decided to have the procedure.

Jim had the Lapiplasty® Procedure in January 2018 and is thrilled with the outcome. He was able to walk the next day after surgery, wearing a boot, and hardly needed any pain medication during his recovery. Today, Jim is able to play with his grandchildren and work around the house pain-free. He is now planning to have the procedure on his other foot sometime soon.

Jim said, “I had very little pain from the surgery. Overall it was easier than anticipated.” 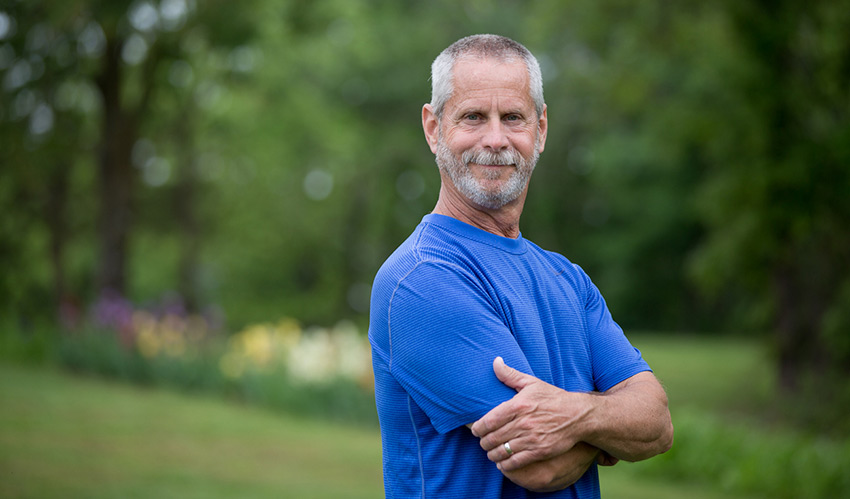 Only a surgeon can tell if Lapiplasty® 3D Bunion Correction is right for you and what level of activity you can expect after healing is complete.  As with any medical treatment, individual results may vary and this experience is unique and specific to this patient only.  There are potential risks with surgery and recovery takes time.  Potential risks include, but are not limited to: infection, discomfort from the presence of the implant, loosening of the implant, and loss of correction with nonunion or malunion.